A Life on Film

My parents rarely fought. And I’m not sure that night in 1972 would even really count as a fight at all. What I do remember is my mother raising her palms to the heavens and repeating, two or three times, “three hundred dollars, Joe? Three hundred dollars?!” That was a lot of money for anyone 45 years ago; in today’s coin, it would be about $1,500. You could buy a used car for that. For my parents – my father was a summer camp director, and my mother was a social worker – it was a significant chunk of change.

Dad had bought a camera. My mother helpfully pointed out that he already had a camera – if my memory serves, it was a Yashica Electro – and that one took perfectly serviceable pictures, didn’t it? But this one, an Asahi Pentax Spotmatic II, with two extra lenses – a 135mm telephoto and a 28mm wide angle (both Soligors) – was special. It was, my father insisted, what he needed to shoot more than snapshots, but to be a photographer. 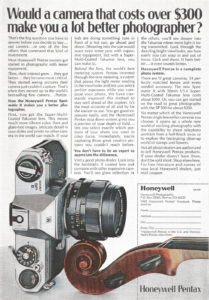 My mother soon backed-down. Her shows of exasperation were mostly theatre meant, I suspect, to mark the moment. My parents invariably supported each other’s choices and decisions, no matter how questionable. If my father wanted to be a photographer, and he needed a $300 top-of-the-line camera to do it, then that’s what he needed. It was as simple as that, and it worked both ways.

And my father became a photographer; not in any professional sense, but as a dedicated amateur, committed to an artistic photography that usually went far beyond snapshots. He subscribed to the Life Library of Photography, a series of books by some of the greatest photographers in the world on the history, theory, and practice of the craft. He studiously pored over chapters on lighting, composition, and technique, and drew inspiration from the special yearbook.

When I look at our family photo albums today, I note a significant change – certainly an aesthetic improvement – beginning around the time my father acquired his Pentax. One photo, in particular, stands out in my memory, even though I haven’t set eyes on it for decades. In it, I am looking out the window of our place in the Laurentians in winter time; the smooth rolling snowscape beyond the lightly frosted windowpane is all gently undulating shades of dove grey and white. It’s a black and white picture, lit only by the show, and my father has managed to capture the same continuous tones of grey – from almost black on the interior side, to almost white on the exterior – in the contours of my face. It is a masterful photo, striking in its depth and simplicity, by a man who did, indeed, become a photographer.